How To Fix The Crysis 2 CD KEY IN USE Error

A lot of our customers have been emailing saying that when they try to join a crysis 2 multiplayer online game, they get ‘cd key in use’ error.

Don’t worry, this is not our key problem. It is a known crysis 2 game bug. Best of all, it is very simple to fix!

Many people are having the problem that the game doesnt remember the serial key and shows ‘key in use’ when multiplayer. This will be patched – it is a problem with CRYSIS 2 not our keys. but for now: heres a fix!

1. Open crysis 2 and log in
2. Click on multiplayer, and put in your serial key
3. Return to singleplayer
4. Go… back to multiplayer and enter your key again.
Now the game will work

Another solution known to work is:

If you get key code in use error when jioning multiplayer, this is a known game bug. Try joining an EMPTY server, then your key will ‘register’ and you can join any match.

We hope this helps! 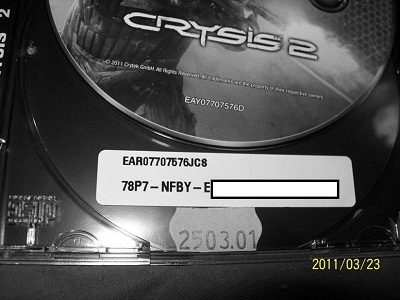 You can now get your crysis 2 product key delivered instantly at our website!

We have full stock of this game ready for immediate delivery. Check out the photos of our cd keys: 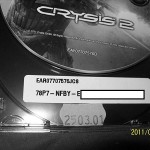 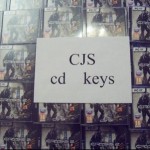 Crysis 2 is available for just £19.99 at CJS CD Keys.  This game can be downloaded using EA Download which grants you to a legal digital download of the game. You can see the product page for crysis 2 serial by CLICKING HERE

Now before all of you rage at me i want to make 2 things clear.

I am not a CoD hater. I played and own all the Cod titles from literally Day 1 of the original CoD release on the PC.

I just feel that they could have done better with the programming of this game, IE hit box fixes, dedicated servers, and better spawn system.

I have no issues with perks or weapons. and I feel that CoD still has a strong overall system. And the campaign is always pretty sweet.

Now with that being said the second thing i want to point out is this is not a fanboy rave about Crysis 2, I just want to compare. And i know that there is a crysis 2 sub forum but this thread is primarily about Cod and how crysis is like it so I direct this at the CoD multiplayer forum base.

Now to start off, I downloaded the crysis 2 MP demo on xbox yesterday.

After getting my butt handed to me in several matches I finally got a feel for the game, how it works and i unlocked all the nifty little extras that needed higher levels to unlock.

After A while i realized I was playing CoD, on steroids.

1) Killstreaks. Black ops you can buy killstreaks and when you get the kills , you can use them. In Crysis2 the killstreaks seem to be the standard 3-5-7 set-up with radar for 3, orbital strike and radar jam for 5, and a ceraph attach ship for 7. the level 5 seemed to switch between matches.

I’m not sure if there are more or not but I did notice that the even when i called in a ceraph ship aka kinda like attack helicopter, i would only get about 1 or 2 kills tops with it. So other than radar and radar jammer kill streaks really arn’t meant for racking up kills, just to add some support.

2) Black ops has perks, set up into 3 tiers, with 5 options in each tier. Crysis has 3 nanosuit modules, Armor power and stealth, just like the 3 tiers in cod. and within those modules there are 6 options each. they even have advanced upgrades for the module choices just like pro versions in black ops. So far out of the 3 in each group you can use nothing seems really over powered, even stealth (which i was super worried about) is not very powerful. there are a lot of anti stealth things and even when someone is stealthed its not perfect, you can see blurs in various lighting situations, and if they run through water you can see the run off.

the guns feel and shoot well, hit boxes seem to register very well too. they all seem to have 3 classes of attachments that you can have on at the same time, scopes, barrel and under barrel attachments. one of which is a hologram, pretty sweet to use.

4) map. Maps so far are comparable to black ops. they are more detailed and more interactable in crysis and in release i believe there will be 12 maps. demo only has 2. in the crysis maps you can swim underwater too which is pretty cool. but so far maps are same with black ops just with way better graphics and design. imo.

5) Overall playstyle. It’s fast, i mean i thought black ops was fast paced but this is unreal. the fact that you have the energy bar, which drains when you sprint, slide, or jump up to grab and pull yourself up a high ledge. this adds a crucial part to the game. the bar reloads pretty fast, like 2.25 seconds from empty to full. certain actions combined make it drain fast too. if you sprint across the map, slide then jump up to a high ledge you will be pretty much out of energy preventing you from using armor modules power or stealth.
there is also a visor that drains energy but it allows you to see through stealth. everything is intertwined and the gameplay becomes more , how should i say this, strategic?

you have to manage a lot of your actions, this games energy bar system, mixed with the high adrenalin action can really open up a lot of sick kills.

for instance i was sprinting with armor on, a guy was stealthed sprinting towards me, he fired a shot which droped him from stealth, the shot hurt me but since it wasnt a head shot i was barely alive with armor. i slid he jumped to perform an air stomp. i ended up killing him but was then quickly killed by a sniper shot. i saw the kill cam of the exchange and it really did look sick.

i understand in the other maps you will be able to kick cars at players as well.

6) killcams, they both have them.

all in all it seems crysis 2 took a lot of concepts from Cod. the game truly does feel like Cod on steroids. In my personal recomendation, this game does take some skill. you have to have good reaction time as well as quick thinking ability. decisions are typically made in your face and instantly. I will be picking this game up most likely. along with homefront to satisfy my fps needs until battlefield comes out.

based on my above summary, ik know i know TL

1) Killstreaks, CoD has more options but i like that they are not game makers or breakers for crysis, just support.
2) Perks, i actually like the armor modules in crysis better, they seem more balanced and they even gain their own xp based on how much you use them.
3) guns, guns are ok in crysis but black ops def has more of a selection.
4) Map, crysis by far wins graphically and in design.
5) overall playstyle black ops was fast but could accomodate casual players, crysis is faster on steroids but may frustrate casual players due to higher learning curve.

How to activate Crysis 2

You can activate crysis 2 once you’ve purchased your cd key at cjs-cdkeys by going to http://activate.ea.com and entering the activation code.  Once you do that, you can then download the game legally using EA’s very own software, EA Download Manager. Once downloaded you can simply install and play the game! Simple as that.

CJS Keys have now received Crysis 2 keys in stock! They are now being sent out instantly via the autokey system.  The crysis 2 product codes are just $32 each which is equal to £19.99 in GBP.

All of the keys are genuine, brand new and unused.

Thanks to CJS CD Keys, you can now get legal cd keys for crysis 2 that can be used on ea download manager. They aren’t generated keys, they are brand new, genuine and unused keys that can allow you to legally download the game and play both multiplayer and singleplayer alike!

You will receive an actual photograph of the crysis 2 serial that is printed inside a sealed retail pack of the game. You can enter this product code at activate.ea.com to activate your full legal download of the game!  All of our crysis 2 product keys are guaranteed – that means that we guarantee you will be satisfied with your crysis 2 keys or your money back!

We offer the cheapest crysis 2 key price on the internet – so don’t delay, buy today!

CJS Keys are selling Crysis 2 activation serial for use on EA download at just £19.99!

Each crysis 2 product key is completely brand new, unused, and taken from a sealed package.

You will be emailed key immediately after payment, allowing you to pre-load the game ready for playing on the moment of release.

All of CJS CD Keys codes are taken from sealed packages that are bought from authorised distributors. They are legal, genuine, and NOT generated!

You can collect the photograph of your activation code online at our autokey system.