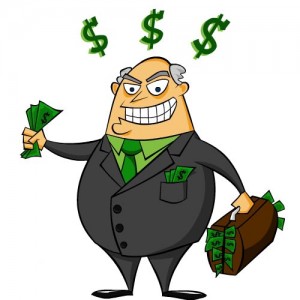 The CEO of Rebellion?

CJS would like to Re-iterate that our keys were fortunately NOT affected by this scandal. None of the Sniper Elite 3 CD Keys sold by CJS-CDKeys.com were affected, and we still have them in stock ready for instant delivery. We are reporting on it in this blog post as we think it is wrong that a company should accuse 60+ retailers in our sub sector of the industry of being illegitimate.

One of the biggest scams to hit the game industry is unfolding as I type this article.   You may already be aware of it. Thousands, if not hundreds of thousands of Sniper Elite Steam 3 CD Keys have been Illegally revoked and de-activated, by the game’s own developer, Rebellion.  CJS CD Keys are lucky enough that we have not been affected by this problem. If we ever are, we will always provide customers with a full refund or a fully working key, but so far, so good.  What’s not okay though, is that Rebellion appears to be trying to frame innocent retailers for their own doings, but we seek to find out the truth about the goings on.

On 27th June, *It has since been confirmed to be around 7000* of CD Keys for Sniper Elite 3 were revoked from customer’s Steam accounts without warning and without a legitimate reason. Affected customers and indeed, the affected retailers who sold the keys, had purchased the keys legitimately, only to see the game disappear from their Steam game library.

How many retailers were affected by the problem?

The situation is currently unfolding, but it appears that over 60+ retailers have been affected by the scam.  An interesting point is that the issue is not unique to companies dedicated to selling CD Keys.  There are also many reports that customers who purchased from official outlets such as GreenManGaming were also affected by the scam.  The only keys which were NOT revoked appear to be keys sourced from boxed copies of the game, and keys bought directly on Steam.

Why did it happen?

Immediately after the keys were banned, Rebellion tried to cover themselves by posting the following statement on the Steam Forums: (it has since been edited to suit their side of the story).

“We have been saddened to learn that some fans have been caught out by companies selling unlicensed or stolen Sniper Elite 3 Steam keys. If you have been affected by this we encourage you to contact the seller in question and seek a refund immediately.”

Just a few hours ago, this statement recommended that customers get a refund from their retailer and purchase the game directly on Steam at full retail price.  They have since edited this out in response to the major backlash from customers who paid in good-faith. They also added the following statement, which we believe is a white lie at best:

“As a developer Rebellion are happy for you to purchase the game anywhere you see fit and support price competition in the PC market – we have in no way targeted any specific vendors (who may have also thought these keys were legitimate), just this one set of keys.”

If rebellion were happy for the games to be purchased anywhere, then why did they previously recommend that customers only buy directly on Steam? (They since removed this comment).  How could ‘just one set of keys’ reach 60+ retailers? The affected retailers are based in countries all over the world, who buy from various distributors around the world. Some even buy directly from the relevant regional publisher, if they are a large shop with sufficient purchasing power.

Unfortunately, we find it rather hard to believe that a single set of ‘stolen’ keys managed to reach official distributors and publisher offices all around the world.  We believe that this statement:

is an absolute fabrication.  We beleive Rebellion banned these keys for the exact opposite reason.  While the term ‘unauthorised reseller’ bounces about the internet, the truth is that there is no such thing.  Under the first-sale doctrine, the copyright ownership of a license key ends after the first sale (I.E from publisher to distributor).  See here for full details.  This means that all legal entities (even members of the public) have a legal right to re-sell their license keys as they see fit.  The developer has absolutely no legal right to stop keys being re-sold.  The only requirement in law for re-selling virtual software / digital goods is that the original copy of the virtual item must be destroyed once copied over to someone. (This makes more sense when considering the re-selling of a digital copy of your legally purchased music, for example).   Of course, with Steam’s DRM system, the key can only be used once, so deleting access to the ‘original copy’ is not an issue.

Unfortunately Rebellion want to encourage the public to purchase their game at the full retail price, directly from Steam, in order that they can maximise profits. We have reason to believe that the banning of keys sold outside of Steam goes against numerous antitrust, anti-competition, and anti-monopoly laws.

While many game developers (and Steam themselves) will legitimately try to encourage users to stay away from re-sellers and buy directly on Steam at the full retail price, what Rebellion has done today is absolutely immoral. They have banned legitimately purchased keys, legally owned by multiple online retailers and gamers worldwide, and covered their tracks by claiming that the keys were ‘stolen’.

What can we do?

If you are a gamer and you have purchased from a retailer only to see your key revoked, we would love to hear from you in the comments section.   Most retailers should give you a full refund or replacement on the key as a goodwill gesture. In the meantime the retailers affected by this scam will no doubt take it upon themselves to clear their names, claim back the money on the illegitimately revoked keys, and make sure that Rebellion are punished for this immoral act.

We (CJS CD Keys) are lucky enough that we have not been affected by this issue.  If you purchase Sniper Elite 3 from CJS CD Keys you will not be affected as we have tested our keys and they are in fully working order.  In addition, CJS CD Keys have a policy where customers will always receive a fully working key (forever) or a full refund, so you know you have full support if you ever did run into trouble for some reason.  CJS would never deal in ‘stolen’ goods, and we know for a fact that many of the affected retailers also would never do such a thing.  Indeed, it’s quite difficult to believe that thousands of game keys were ‘stolen’ and magically reached numerous distributors worldwide in the space of a day.  It’s rather obvious who is the guilty party here.

We also found an interesting comment from PC Media PTE LTD, an official seller of games, similar to ourselves, which was posted on the controversial steam thread:

“Ok, this kind of thing has to stop.

I understand where Rebellion are coming from in regards to prices being too low and regional based restrictions being bypassed but this is a free internet where people have the choice to do what they like with something they just purchased.

What you are doing here is against the fair trade act 1973 and will be dealt with to the full extent possible in terms of claiming any losses and damages from Rebellion. All of our suppliers are officially licensed distributors yet you have the audacity to claim we are all fraudulent buyers and that everyone can only buy it from steam for it to be legitimate.

This is a complete fabrication and has no legal standing whatsoever. Every person or consumer has a right to purchase your game wherever they see fit of that company is buying your games legitimately and you cannot punish us or any other seller for selling your game if this is the case.

This is possibly the most underhanded tactic i have ever seen from a publisher and you deserve to be punished for it.

Which retailers have been affected by the scam?

We are currently aware that over 60+ online retailers have been affected by the scam.  There are numerous reports on the Steam forums of GreenManGaming customers have been affected too, so it seems that this problem is not unique to CD Key retailers. It’s rather clear that Rebellion are trying to monopolise on the digital sales of their game, while framing legitimate retailers and claiming the keys as ‘stolen’ to try and cover their tracks.

SHARE this article on Steam Forums by using this exact link to get around Steam’s rather unfair censorship filter:
https://www.facebook.com/CJSCDKEYS/posts/10152500845959250

It appears that Rebellion have attempted to backtrack again on their post by providing a short list of companies which they sell directly to, seemingly trying to imply that anyone not on the list is not legitimate.

There is a slight flaw in this though…   CD Key shops do NOT tend to buy keys direct from the developers. They buy the games in physical boxed form, from authorised distributors.    Do you see Amazon, Game, Shopto, and every other single independent boxed video game company worldwide in their list?  No.   That’s because they are only listing companies which they have direct contracts with.. They are excluding the long list of companies which buy boxed copies from the publisher or distributor… and that includes most of the 60+ digital key retailers.

The truth is, CD Key shops do NOT tend to buy in digital form. They buy physical boxed copies and convert them into digital keys.

The supply chain for physical boxed copies goes something like this:    Rebellion ->  Publisher -> 100+ Distributors (in various countries) ->  Retailers (Amazon, GAME, CJS CD Keys, EBGames, etc).  Some of the bigger retailers can sometimes buy directly from the Publisher if they have sufficient buying power.

While the likes of Amazon ship out the boxed version of the game, CD Key stores open the boxes and sell them digitally. That is the sole difference.  The growth in the market over the last years has enabled CD Key sellers go a step further, and have the official distributors scan the codes on behalf of the CD Key shops, saving on unnecessary shipping.   The distributors can be anywhere in the world, since keys can be delivered within seconds.   The result?  Cheap games, sold digitally.

As you can see, while our keys may seem impossibly cheap to the average digital gamer, they are actually not so unbelievably cheap, when compared to their physical counterparts.

While the situation unfolds on the Steam forums, we will post relevant screenshots here, to try and bring together the evidence. Please click the images to see them larger: 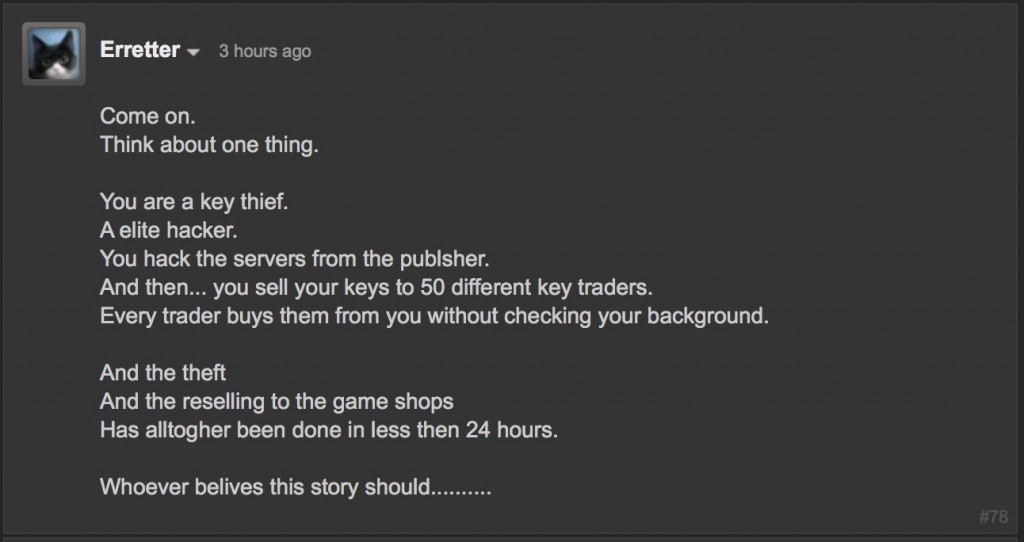